You can access a deck's settings by swiping a deck row left on the main screen. Tap the settings icon to access settings, or tap the plus icon to add a card. 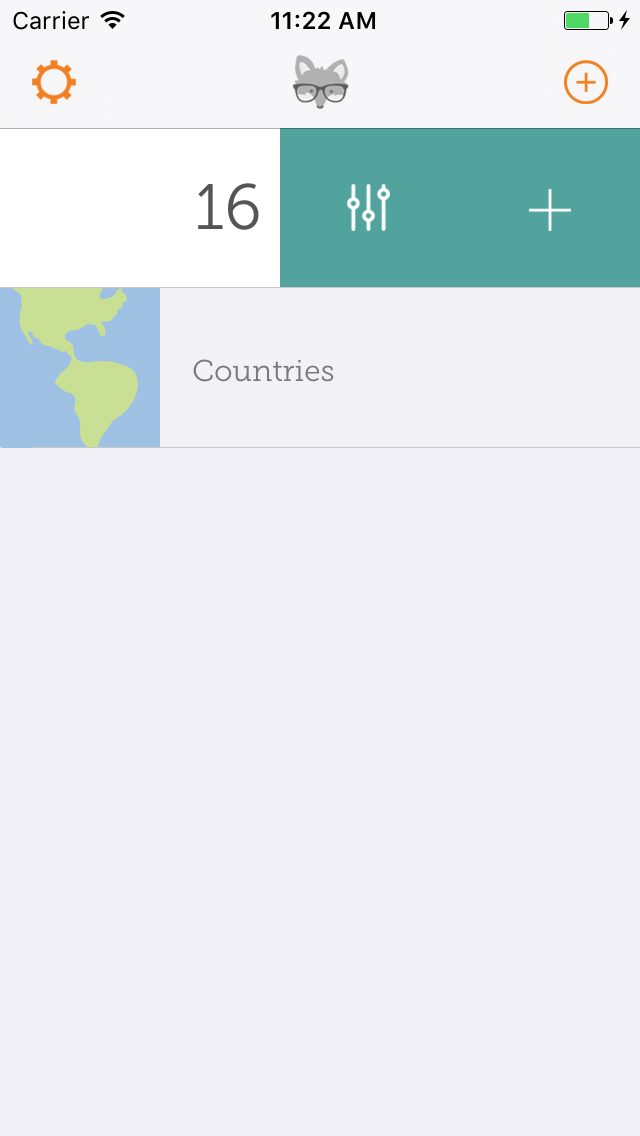 At the top of the deck settings screen, you'll find a collection of stats about your activity on this deck. "Mastered" cards are defined in Algorithm settings. By default, a card is "mastered" if you remember it for more than 21 days.

The colored line at the very top displays your progress on this deck. New cards are blue, with increasingly advanced cards represented by warmer colors. 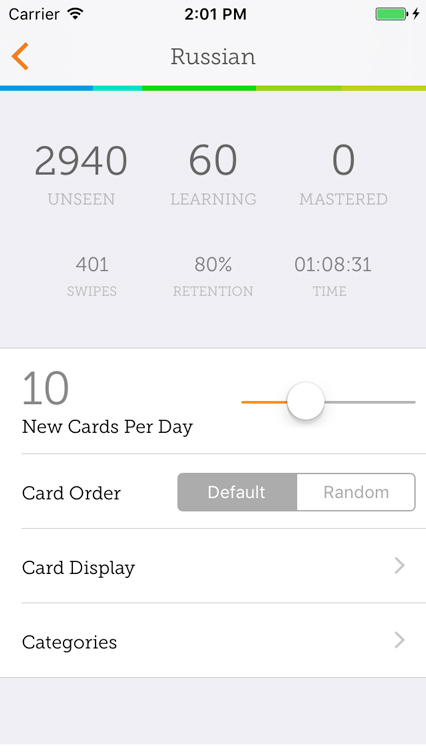 One of the best ways to use CleverDeck is to create your own cards. Especially if you're learning a language, finding and making cards for information you find yourself greatly benefits contextual understanding and memory retention.

After tapping the plus icon for a deck, you will be presented with a blank card that you can fill in with the relevant fields. If a deck has a third field (e.g. transliteration) or fourth field (e.g. sentences), there will be space for those as well. All fields are optional - though, depending on your card display settings, you may need some fields for cards to make sense when you are actually reviewing them.

You can also add an image or audio to your own cards. Images can be selected via web search, from an album, taken with your phone's camera, or pasted from the clipboard (this final option only appearing if there is currently copied onto the clipboard).

To add audio, you can either record your own voice or, for language decks, generate a text-to-speech recording for your inputted text. Text-to-speech synthesis requires an internet connection and that the target language field be filled (so the system knows what text to synthesize). For optimal results, the TTS system uses voice synthesizers trained and unique to each target language. 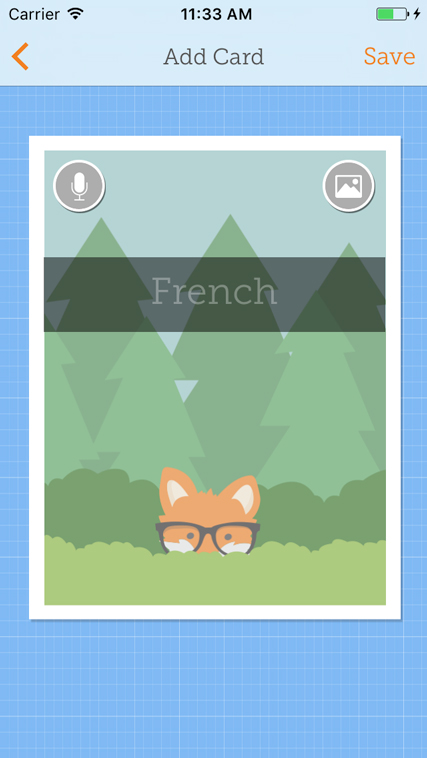 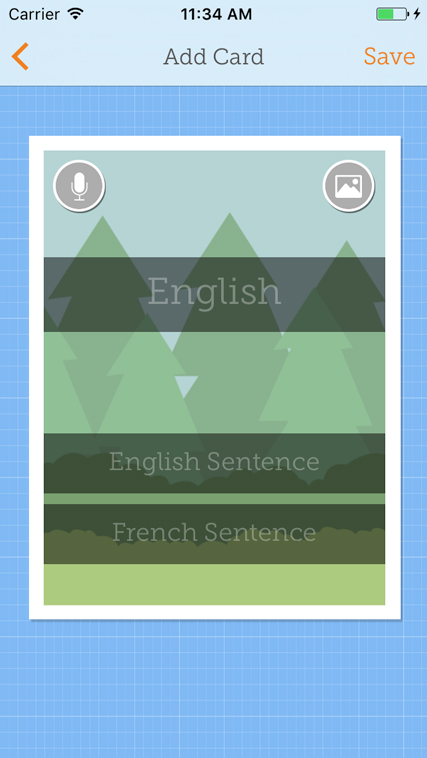 Once you're done creating a card, press save to add it to the front of the deck. User-created cards take priority and will appear before other new cards. Keep in mind that cards you create are categorized as new - if you don't immediately see them in a deck, it's probably because you have review cards you need to swipe first or because you've already gone through your new cards for that day.

You can edit any card - either included in our decks or one you created yourself - by long-pressing it while studying. Select "Edit" to modify any of the card's fields, image, or audio. 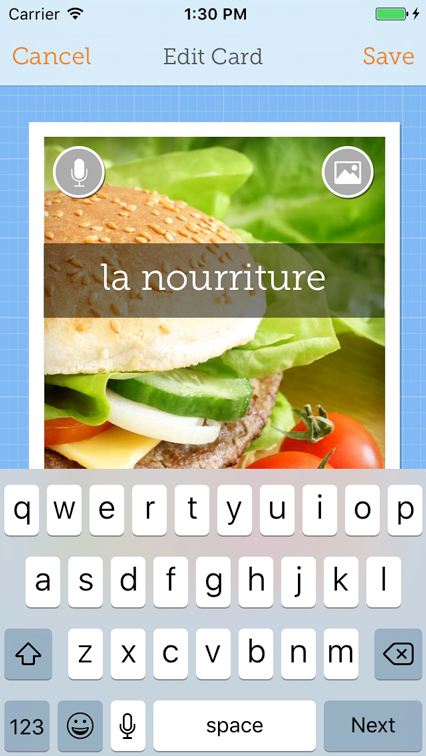 You can also edit user-created cards from the My Cards screen. 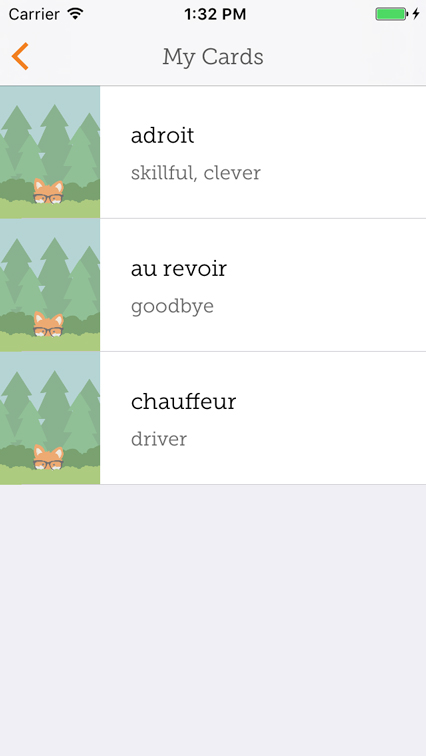 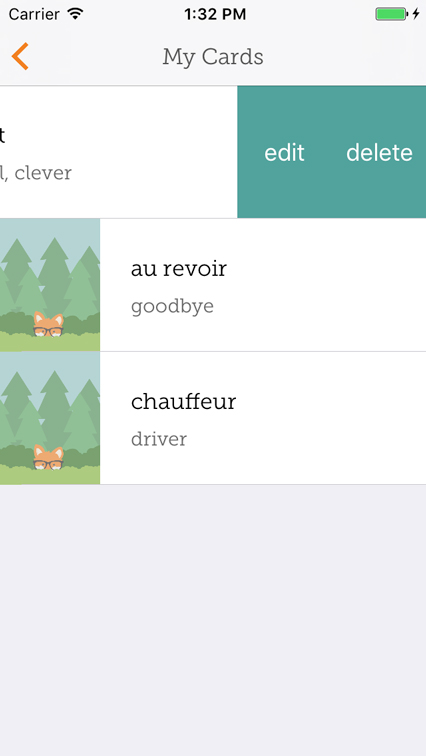 While creating a card, a list will appear that displays cards already included in the deck that match your input. Tap one of these suggestions to move it to the front of the deck and see it in your next study session. 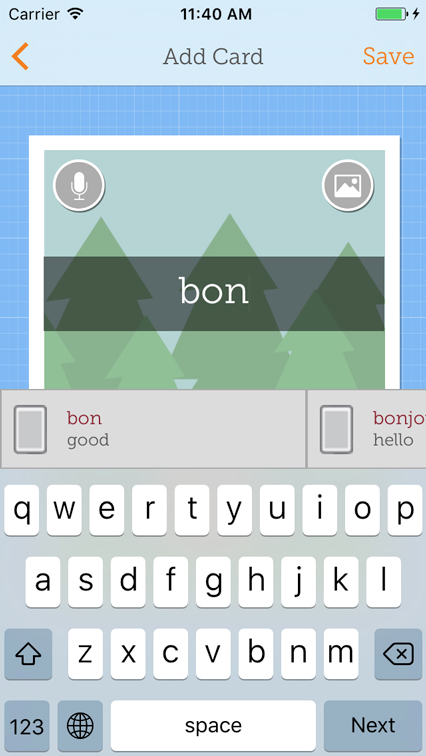 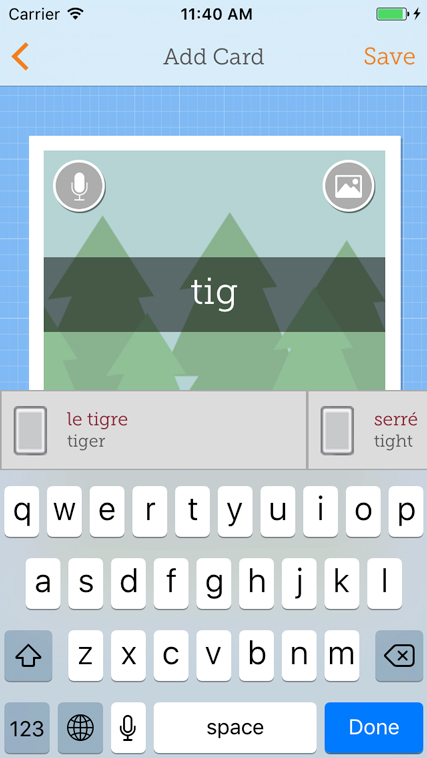 Again, cards that appear in the auto-complete suggestions are already in the deck. You will eventually see them. Tapping them just moves them from their current position to the very front of the deck.

You can customize how a particular deck's cards appear on the Card Display screen. You are completely free to choose which fields should appear on the fronts and backs of cards. This freedom gives you a lot of flexibility in deciding how you'd like to study, but also permits you to create nonsensical configurations if you're not careful. Tap and flip the example card to make sure you're getting what you expect. 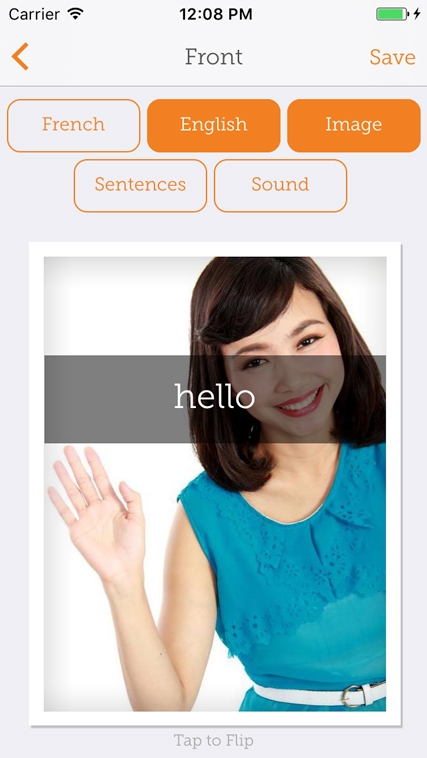 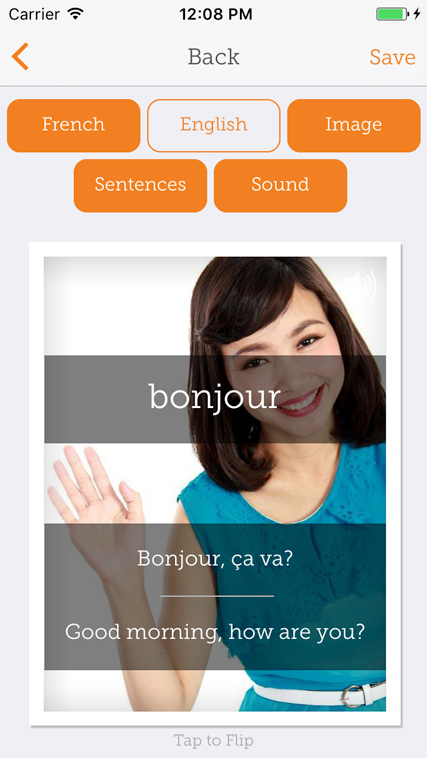 All CleverDeck decks have a default configuration that matches how we assume most people would like to study. However, by customizing the Card Display, you can achieve very different study experiences. For example, you could study with a language deck by being prompted with the English, the target language, or just audio depending on the Card Display. 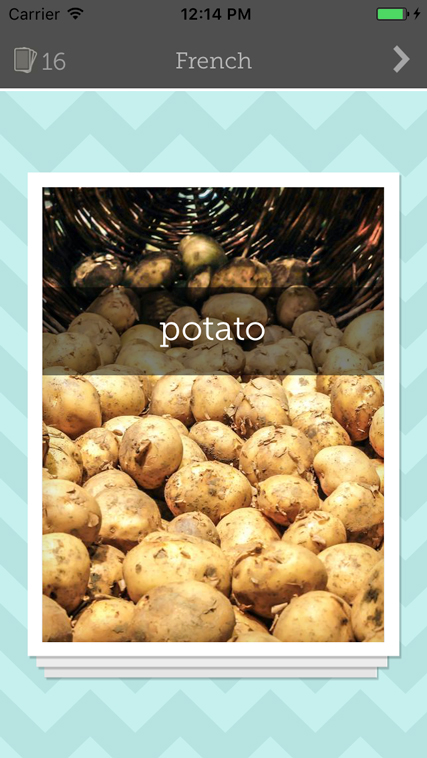 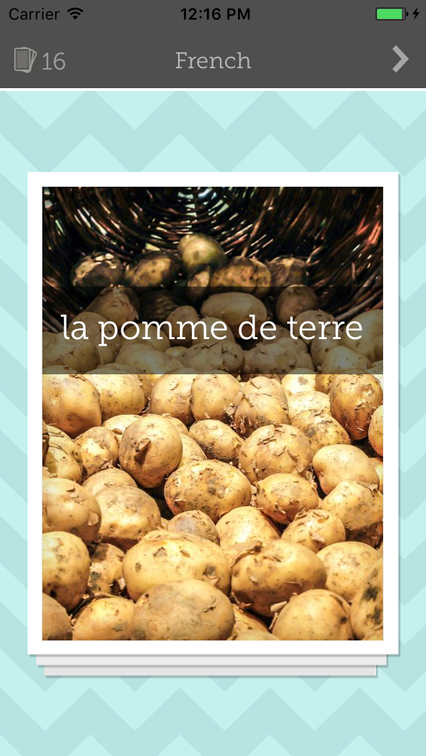 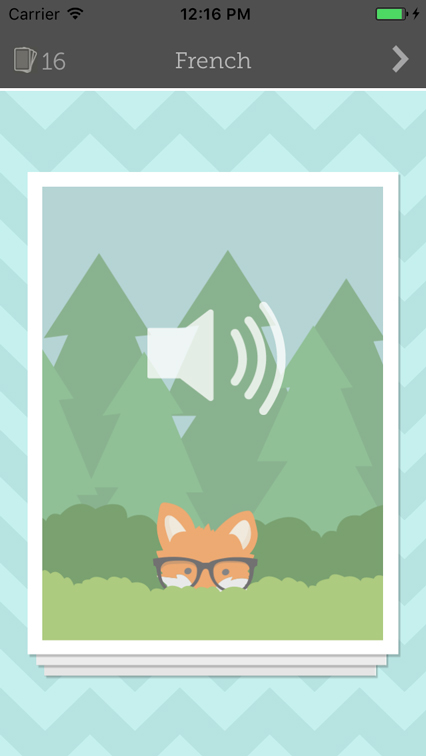 It's possible to configure multiple Card Displays for a single deck. See the section on siblings to learn more.

A "three sided card" is one in which you quiz yourself on two pieces of information instead of just one. Many CleverDeck decks, including all language decks, are capable of rendering three sided cards.

On a CleverDeck card, the "third side" is displayed on the bottom of the card's back. For language decks, this is where the example sentences are displayed. By default, cards simply display an example sentence and its translation. 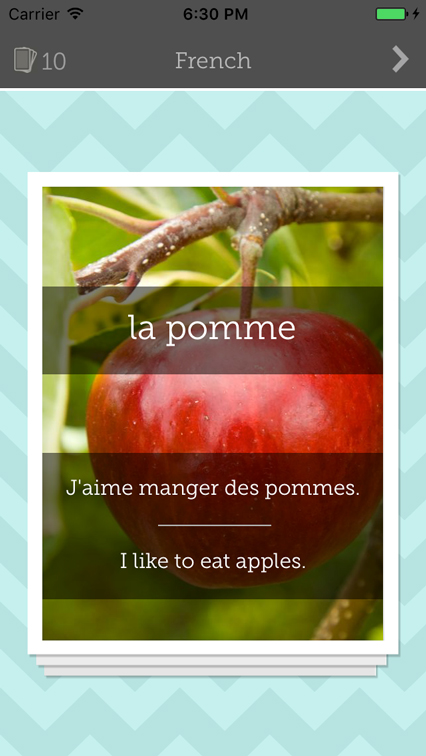 However, by enabling the Flip Sentences setting, a single sentence will display. The translation will only reveal itself if you tap the sentence. In this way, you can now test yourself on full sentences, in addition to the usual vocabulary words. 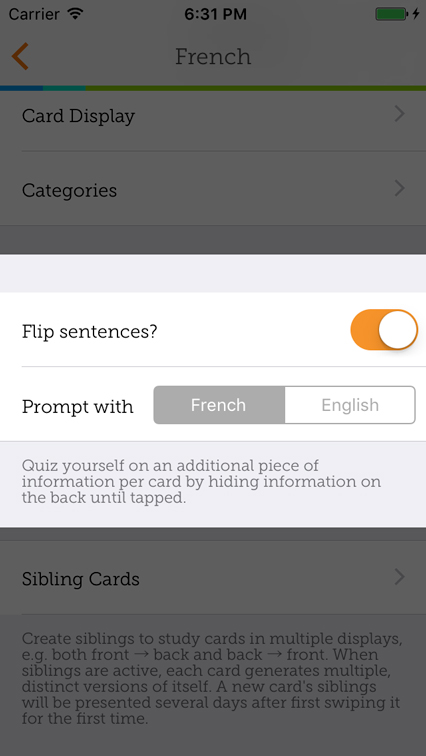 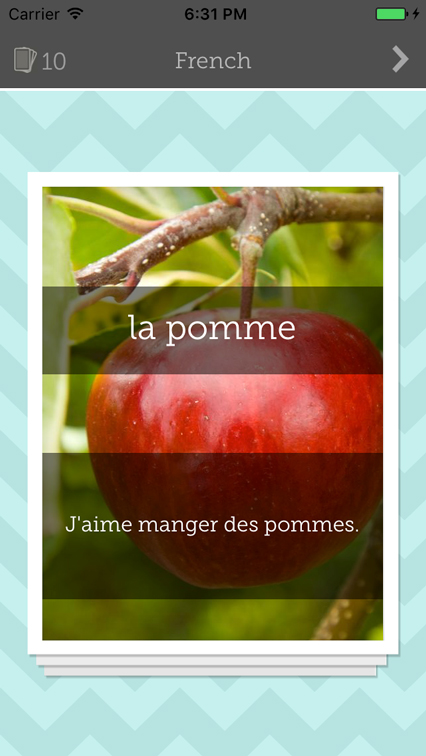 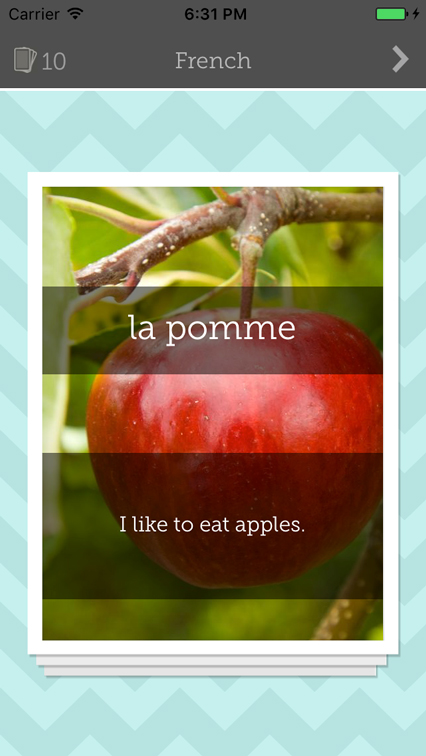 On other non-language decks, this option might appear as "Tap to Reveal." In the same way, this hides information until you tap the display area on the back of a card. 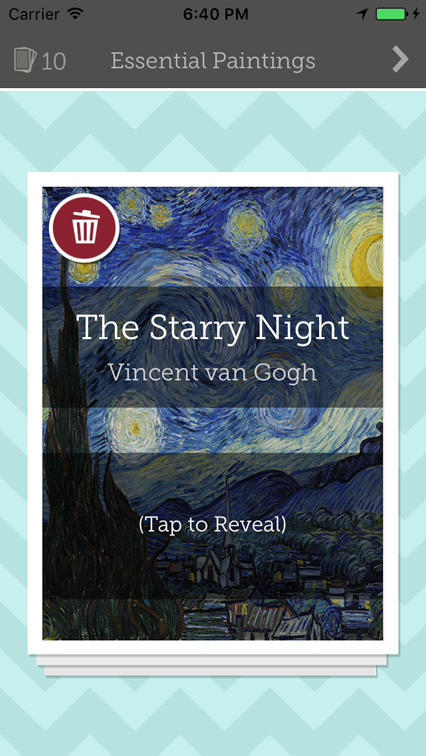 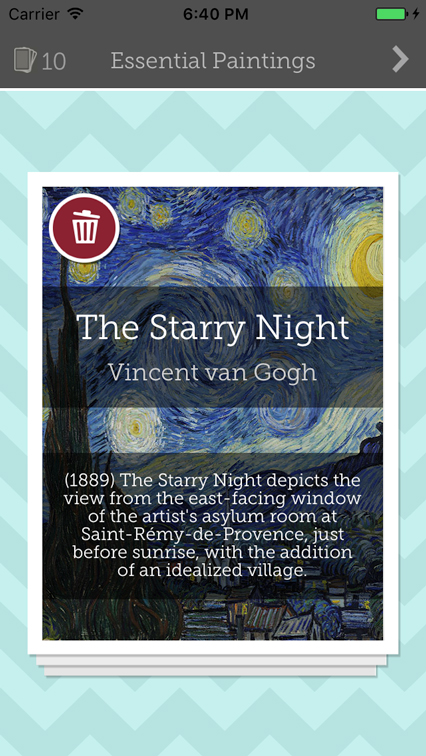 Every CleverDeck deck has a default order in which its cards are arranged. For language decks, the order is roughly determined by word frequency. Others are ordered alphabetically, chronologically, or follow some approximate difficulty metric. Deck descriptions typically specify the rationale behind the default ordering.

You can also progress through a deck in random order. In random mode, cards are chosen randomly at the beginning of a study session. Because the app does not know ahead of time which cards will be picked, you may have to wait briefly for cards to fetch their images and audio from the web.

Finally, select "Add" mode to only receive cards that you either add (through auto-complete suggestions or categories) or create yourself. This can be useful for language decks where you want access to 3000 pre-made cards, but don't want them presented to you automatically.

CleverDeck downloads card images and audio from the internet as it needs them. The app is completely functional offline, but won't be able to retrieve card media if left offline for very long.

You can ask CleverDeck to download media ahead of time by using the Cache option. Depending on your settings, the app will anticipate what cards you are due to see over the next couple of weeks and retrieve them on the spot.

Due to the large amount of data it will likely download, this function requires a wifi connection. If downloading is taking a long time to complete, you can press Cancel at any time and still keep all the media that has already downloaded.

Some CleverDeck decks allow you to move groups of cards to the front of the deck according to their category. If a deck doesn't have categories, that option won't appear at all in the deck's settings. 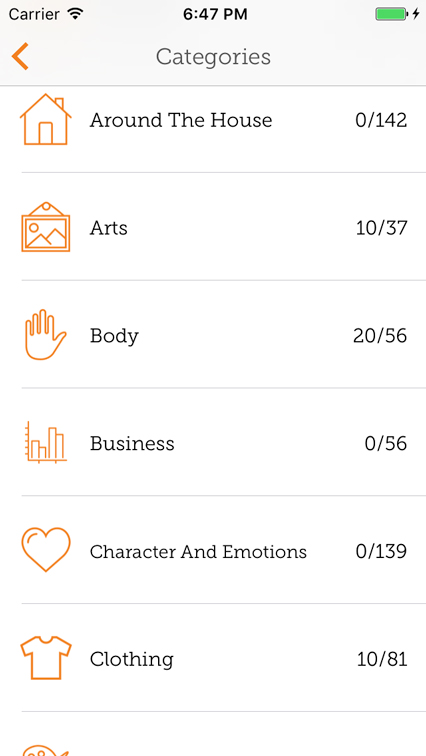 To move 10 cards of a particular category to the front of the deck, simply tap the row. Swipe a row left to undo. Tap a row again to move more than 10.

As with adding cards via the auto-complete suggestions on the Add Card screen, all of the category cards are already in the deck. Tapping a category simply removes 10 cards from their current positions and places them in the front of the deck for immediate study.

One of the primary frustrations of using a spaced repetition system is the speed at which cards can accumulate if you don't review for several days. If you ever find yourself with an intimidatingly large card stack to tackle, the very best thing you can do is immediately set New Cards Per Day to zero and begin working through all the cards at your own pace. When things feel more manageable, you can increase New Cards Per Day again.

However, a second option is to reshuffle the deck so that the app gradually introduces your review cards back to you over the coming days and weeks. Reshuffling doesn't affect future review intervals and can make getting through a huge stack of cards much less stressful.

You may find that some decks' cards are much easier for you to remember than others'. For example, when first learning a new language, unfamiliar spelling patterns and pronunciations can make retaining new words especially difficult.